|| Digging into roles and capabilities in WordPress – extension and global usage

You may have noticed that understanding and extending roles and capabilities in WordPress can be a bit confusing as a start. On the one hand there are the default roles: (Super Admin), Administrator, Editor, Author, Contributor, Subscriber, and they all have more or less rights (=capabilities) to do actions on a WordPress website, with descending rights as they are ordered here.

These roles do not exist since the early days of WordPress. They are mapped onto the traditional WordPress role system, which is a user level system from 0-10, while 10 is the highest level (all rights) and 0 is the lowest level (fewest rights). This interrelationship is shown on the following table from the Codex: 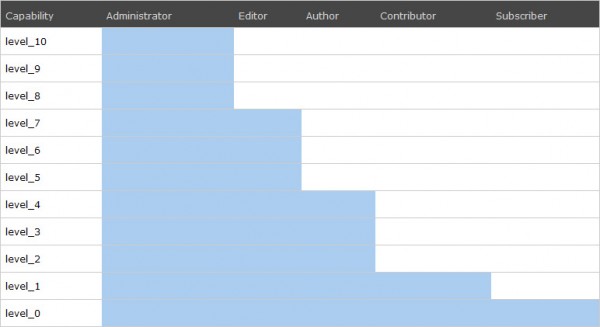 Important things to know about roles and capabilities

The default system may be enough for blog systems, but not when it comes to WordPress as a CMS. The following things are important to know:

How to extend the default role system then?

You can search for functions and information how to do that in the Function Reference or using Google. I recommend the great and well-known Members Plugin by Justin Tadlock, which will make managing these things quite easy using the WordPress backend. Just check it out. It is described as follows:

"Members is a plugin that extends your control over your blog. It's a user, role, and content management plugin that was created to make WordPress a more powerful CMS.

The foundation of the plugin is its extensive role and capability management system. This is the backbone of all the current features and planned future features."

How can we easily get roles and work with roles in Plugins and Themes now?

The following functions proved to be really useful, as they work almost anywhere you call them inside WordPress.

Dieser Eintrag wurde am 2. July 2011 um 17:17 in der Kategorie WordPress, WP Scripts veröffentlicht. You can book the comments for this article RSS 2.0. Feedback, discussion, commendation and critics are welcome: Write a comment or trackback.

Warning: Use of undefined constant Ext_related_links - assumed 'Ext_related_links' (this will throw an Error in a future version of PHP) in /home/.sites/609/site1266/web/blackbams-blog/wp-content/themes/SilentWoodsByBlackbam/single.php on line 75