|| Programming Languages for the Web 2011

Recently I finished my second bachelor thesis called "Programming Languages for the Web 2011" with the aim of digging deeper into programming language design, structure, usage statistics and affordances of the WWW. It was a matter of interest to know what possibilities web developers have and what programming language they prefer to use.

If any of these points is of interrest for you, then you can download and read the whole work from here, as it might be useful. 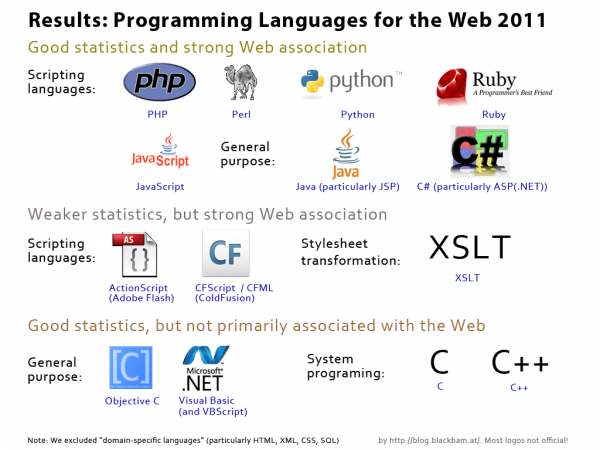 Programming languages have huge differences among themselves. They can be classified among their computational model, hardware abstraction level and programming paradigms. Technically comparable distinctive features are basically the level of compilation/interpretation, storage management, type system, effectiveness and expressiveness. Other distinctive features include popularity and a lot of things associated with popularity, syntactic / semantic rules (which are only difficult to compare technically) and the intended use of a programming language. Affordances for programming languages on the Web are different and limited. There has to be a distinction between server-side programming, client-side programming and web application programming:     Especially web specific features, frameworks, solutions, techniques and technologies can improve a programming languages‟ qualification for the Web significantly. As a result of the work we can assume, that programming languages for the Web 2011 are mostly scripting languages that have a tendency to high hardware abstraction. Based on their popularity, we figured out the following candidates to be the most important ones currently, according to statistics (note that the information in brackets only describes primary characteristics):   It stands out that C# is the only “mostly proprietary” language to be widely used for web programming purposes and that 5 out of 7 candidates are scripting languages.   There are some more programming languages, which are almost equally important, but have one of “not as good in statistics” or “primarily not intended for web programming”, these are:     There are a lot of domain specific languages which are not included in this comparison as they are no real programming languages; these are HTML, XML, CSS, and SQL in the first place.

Warning: Undefined variable $time_since in /home/.sites/609/site1266/web/blackbams-blog/wp-content/themes/SilentWoodsByBlackbam/single.php on line 42 Dieser Eintrag wurde am 4. September 2011 um 21:21 in der Kategorie Programming languages, Web Development veröffentlicht. You can book the comments for this article RSS 2.0. Feedback, discussion, commendation and critics are welcome: Write a comment or trackback.